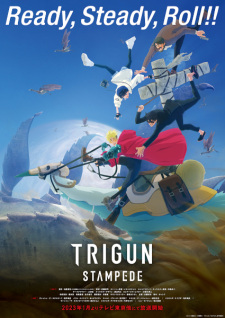 On the planet Noman's Land, reporters Meryl Stryfe and Roberto De Niro traverse the desert in search of the infamous outlaw Vash the Stampede. But the man they find near the desolate town of Jeneora Rock is a far cry from the lethal terrorist they expect. In reality, Vash is a passive and carefree drifter; he is a proponent of peace, beloved by the residents of the town. His inaccurate reputation actually stems from the widespread atrocities committed by his twin brother Knives Millions. Still, Vash is dubbed "The Humanoid Typhoon'' due to the tendency for violent chaos to follow in his wake. Chaos soon arrives in the form of bounty hunters seeking the high price on Vash's head, and their violent pursuit poses great danger to the town and its precious power plant. Thanks to his gunslinging prowess, Vash is able to resist most of these nefarious forces. Yet he must soon face off against the ultimate evil: the unstoppable destructive power of his malevolent brother. [Written by MAL Rewrite]