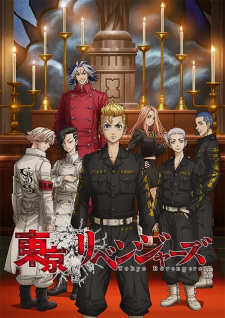 In spite of his best time-leaping efforts, Takemichi Hanagaki continuously fails to prevent the present-day death of Hinata Tachibana, his adolescent love. The adult Takemichi grapples with grief and the ramifications of the Tokyo Manji gang's criminal empire—an unintended product of his timeline meddling. Though the gang once operated under the idealistic Manjirou "Mikey" Sano, it has now been taken over by the malicious Tetta Kisaki and, as a result, has abandoned its original optimistic intent. Despite feeling hopeless, Takemichi travels to the past once again to investigate Black Dragon, a rival motorcycle gang whose actions ultimately lead to Hinata's demise. There, he meets the young Hakkai Shiba, a fellow gang member whose older brother, Taiju, tyrannically rules Black Dragon. When Taiju brutally beats Takemichi in a one-sided street brawl, Hakkai attempts to withdraw from Tokyo Manji in apology—an act that Takemichi must prevent to spare Hakkai a grim future. Through a shared tragedy, Takemichi bonds with Chifuyu Matsuno, establishing a close comradery both boys desperately need. With Chifuyu on his side, Takemichi works to unravel the fates of Black Dragon's members, fighting to create a happy future for his loved ones. [Written by MAL Rewrite]