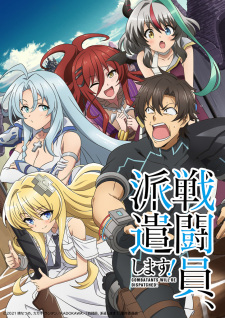 As a chief operative of the villainous Kisaragi Corporation, Sentouin Roku-gou receives orders to help the organization conquer the entire known universe. Tasked with infiltrating the kingdom of Grace—a mission that could change the fate of the world—Roku-gou mistakenly believes that his skills as a combatant are superb, fuelling his arrogant attitude. To ensure the success of the mission, Alice Kisaragi, an exceptional android with a youthful appearance named after the company itself, is assigned to be Roku-gou's travel companion.

Upon their arrival at the outskirts of the kingdom, Alice and Roku-gou encounter Snow, the commander of the country's royal guard. Snow leads the pair to a broken legendary artifact, and Roku-gou seizes the opportunity for a long-awaited promotion at his company and changes the recitation for the sacred ritual to an embarrassing phrase. As punishment, the princess of the kingdom forces Roku-gou to become an honorary knight, fulfilling part of his mission. Having infiltrated the kingdom's inner circle, Roku-gou must now help his new employer fight against the Demon Lord's Army, all while perpetuating evil deeds as a combatant of the Kisaragi Corporation.