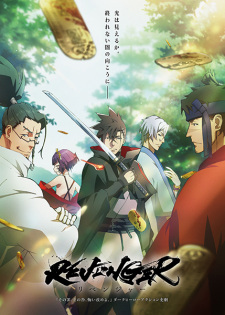 Tricked into assassinating his own prospective father-in-law, righteous samurai Raizou Kurima is overwhelmed with guilt. In order to reclaim his honor, Raizou swears vengeance on the lord who gave him those misleading orders. In his pursuit, he is aided by self-proclaimed merchant-of-all-trades Yuuen Usui, who is actually one of the Revengers—assassins who seek justice for the wronged and dispense bloody revenge on their behalf. Tragedy seems destined to follow Raizou as he becomes increasingly intertwined with members of the Revengers. As he begins working as a vigilante alongside them, the complicated web between the corrupt Japanese political elite, the unscrupulous Europeans, and the Revengers gradually reveals itself. The more entangled he becomes in these affairs, the more Raizou realizes that justice is as deceptive as the honor that he sought to redeem. [Written by MAL Rewrite]