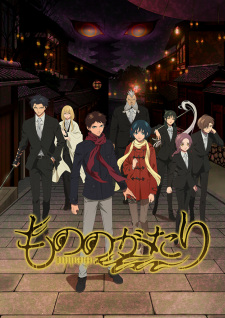 Saenome are tasked with sealing spirits that possess objects and pose a threat to society. Known as tsukumogami, these spirits are generally non-violent, and saenome normally seal them after a simple verbal exchange. Traumatized by a previous deadly encounter with a malevolent spirit, Hyouma Kunato refuses to use peaceful methods and gets into physical confrontations with all tsukumogami that cross paths with him. Deeming this behavior unacceptable for a future clan leader, Hyouma's grandfather, Zouhei, proposes that he starts living with Botan Nagatsuki, a young woman whose family is composed of six tsukumogami—lest he be excommunicated. Determined to track down the spirit that took everything from him, Hyouma reluctantly accepts Zouhei's proposal. As unknown groups of evil spirits begin to jeopardize the balance between worlds, the young man must gain the trust of Botan and overcome his hatred for her mysterious family. [Written by MAL Rewrite]