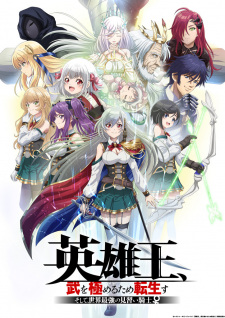 The hero king Inglis—who dedicated his entire life to building his country—is now approaching death. To award him for his honorable achievements, the goddess Alistia appears and grants him one wish. Having never been able to master the blade, Inglis asks to be reincarnated in order to do so. In a blink of an eye, Inglis finds himself born in the far future as a daughter of the Eucus noble family. Six years later, Inglis is discovered to be Runeless—incapable of utilizing the runes that enable the use of magic in this era. She is therefore ineligible to become a knight. However, this fits in well with Inglis' plan: she instead decides to become the squire for her cousin, Rafinha Bilford, allowing Inglis to focus on pushing her limits. For Inglis, the challenges this familiar yet different world has to offer are instead opportunities for her to hone her skills—and possibly become an extraordinary squire in the process. [Written by MAL Rewrite]